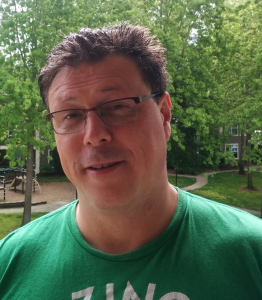 Mark's early childhood overlapped with the golden age of video arcade games. He was lucky enough to have two older cousins that owned an arcade and was always excited to open up a cabinet to see how it worked (or at least look on as cousin did repairs). Donkey Kong Jr., Tempest, Pole Position, and Galaga were some favorites that led to an interest in technology. In Junior High School he took a VB class and attended a computer after-school program. The skills he picked up in those classes stoked his passion and helped him automate PC games as well as online MUD games. Later he created bots and mods for other online games.

After some college, Mark took a turn toward less technical pursuits and became a dance teacher. He specialized in swing dancing about the time Swingers (the movie) became popularized. While teaching, he was still drawn to tech and took on a more technical role at his studio. He updated computer hardware, software, stereo equipment, and automated many tasks to make his fellow teachers happier.

Working along-side coders, he saw beyond the technical aspect into the creative and made the jump into development with Ruby. Now, with Ruby experience, he is looking to round out his knowledge with new languages, build tools, blockchain, containerization, and data science - hoping to discover the next step in his adventure.